7 Things That Won The Game For Wales

Wales’ triumph over Los Pumas might’ve come as somewhat of a shock to those not supporting the tourists, but Gatland and his team have done away with the tactics of old and a new philosophy is slowly, but surely, emerging…

I was mightily impressed with Wales’ speed off the mark on Saturday. What often happens with lightning fast blitz defences is that the communication is found wanting and the dreaded dog leg forms; a missed tackle invites a flood of attackers to pour through; or if the ball is shifted away from the point of focus, it can exploit the natural spaces that are found wide. However, Wales had a 90% tackle success rate (the joint highest rate of all tier 1 nations over the weekend, with the other team being Australia).

The line speed denied the Pumas to have a real crack at the Welsh out wide, where the hosts have oodles of paces and power, and could’ve (should’ve) caused no end of trouble for the visitors. Ultimately, it was this line speed coupled with textbook tackling, that frustrated the Pumas into a standstill. However, that alone would not have been enough to win them the game, there was a key element of the game that made the Argentines look somewhat flustered…

Wales were very intelligent at the breakdown this time around, having previously been found guilty of committing half the pack into every ruck to try and slow or steal opposition ball. However, something the southern hemisphere teams have mastered is carefully assessing each ruck and making the decision whether or not to commit and compete. Elliot Dee, Seb Davies, Ross Moriarty and James Davies showed excellent decision making as to when or not the turnover was on, resulting in either incredibly slow ball for the Pumas or a penalty for the men in red. Blessed with a deep pool of intelligent flankers, this is an area where Wales should and could be on par with the likes of the Wallabies and the All Blacks.

Against the Pumas, the visitors were undoubtedly on top in this area, dictating the pace of the game and keeping the hosts out for almost 78 whole minutes. In fact, Wales were way out in front with turnovers across the summer touring sides with 16, five more than Australia and Ireland.

When I saw the team named to face the Argentines, I must admit I was somewhat concerned about the lightweight look of the pack. I had no doubt that the front row could front up at the set piece, but with the unfamiliar pairing of Cory Hill and Adam Beard in the second row. There was nothing to be overly worried about as it transpired: both Hill and Beard carried the ball effectively, defended stoically and disrupted mauls efficiently; belying their relative inexperience at international level.

The fact that the Pumas pack struggled with the technical side of things really helped Wales’ cause, denying the hosts an opportunity to really turn the screw on the Welsh as they perhaps had intended to initially. In the loose, the red pack weren’t found lacking in power and physicality, and their mobility only further frustrated the hosts.

I still stand by my opinion that James Davies is the best openside in Wales. Although not as big and bulky as his rivals, Ellis Jenkins, Sam Warburton and Josh Navidi, Cubby is by far the most prolific jackal in the country and is often crowned king of the turnover in the PRO14. He’s no stranger to the try line either, an Olympic silver medal is a testament to his pace. When Wales were on the backfoot and Argentina were finding some ground, Davies would appear from seemingly thin air to clamp onto the ball and earn Wales a penalty, relieving all pressure and leaving the hosts scratching their heads. This is something he does time and time again for the Scarlets.

As powerful and formidable a trio Lydiate, Warburton and Faletau made in the past, having the mobility of Davies and Moriarty proves invaluable in the looser, quicker games… an environment that an expansive gameplan naturally creates. At the Scarlets, Pivac quickly realised that having three (or sometimes four or five) breakdown experts is worth the sacrifice of raw power and weight up front. I would still prefer to see Seb Davies remain in the second row, opening up a space for an additional ball winner in the back row, but that’s why I’m not on the Welsh selection committee! 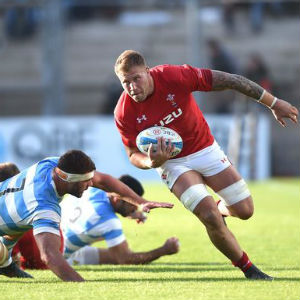 No, Wales did not revert to the tactic that once won Wales the Grand Slam in 2008. Players like Mike Phillips, Jamie Roberts, Jonathan Davies, George North and Alex Cuthbert made for a towering set of backs; however, of those named, only the Ospreys bound wing was present over the weekend. But you can forgive defences for committing an extra man or two to defend against the colossal wing when he comes a chargin’!

What Wales successfully managed in this encounter, is something I have been wanting to see from the men in red for quite some time. We all know what power North can bring, and he inevitably sucks in the defence when he comes infield… but very rarely do we see North (or any of the big men) used as a decoy to open up spaces for the other speedster in the team.

Until Saturday evening, where North’s presence nailed Marcos Kremer’s attention, which allowed Gareth Davies to exploit the gap and burst through. With the winger already at full tilt, he was in the perfect position to offer a perfect support line and scored as a result. It’s easy (in theory) to defend against big men running straight lines… it takes a little more guile to calculate if it’s worth standing your ground against the battering rams when you’ve the likes of Gareth Davies, Hallam Amos and Josh Adams lurking in their shadows!

Wales’ aerial proficiency seems to have diminished over the years and have been schooled in territorial kicking by the likes of Australia, Ireland, England and New Zealand. On Saturday, however, Davies, Amos and Parkes all chose the right options when kicking, varying between the up and under, deft chips and grubbers, while Patchell’s big right boot earned his team acres of territory. Normally I have my face in my hands when Wales adopt a kicking game, as it rarely works in their favour; however this time it was a variation that kept the Pumas on their toes throughout the game. 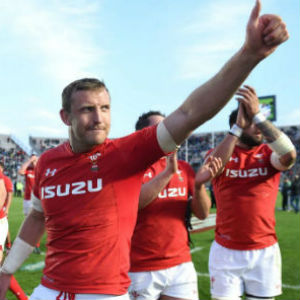 The red line had Shaun Edwards’ signature all over it; not only was it ferociously aggressive and menacingly disruptive, it was well organised and at times, impenetrable. The Welsh found themselves camped on their try line on several occasions, but refused to yield a try until the game was all but won. Welsh fans will be hoping to see Edwards remain in the Welsh camp until the 2019 Rugby World Cup.